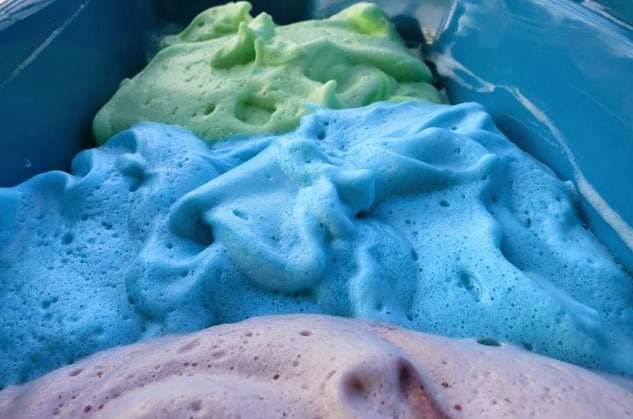 Firstly, to understand what the heck Slime ASMR is, It would be helpful to know what ASMR actually is and what the abbreviation stands for, assuming you already know what slime is, which I’d imagine you will.

After all, we’ve all probably created it in science class at some point in our lives, but perhaps we had no idea why we enjoyed it so much, hopefully, I can give you some insight.

ASMR is the tingling sensation in the scalp, down the back or near the neck area when something that either you visually or audibly find satisfying is witnessed – this varies between person to person so a lot of the fun is experimenting with different sounds and visas to find something that triggers the response.

If you’re in doubt; we have all felt this at some point, I’m willing to bet, without even realizing what it was we were experiencing.

If you’re interested in finding more about what ASMR is, then check out this article I wrote.

ASMR Slime – What is it?

Getting back to the of this article, I’m here to answer that ASMR Slime actually is.

It has become a recent phenomenon on youtube to essentially poke holes into colorful slime. This is both satisfying for the creator in question as well as anyone who watches the video.

A lot of this ASMR is directed at children from what I’ve learned, so it’s pretty harmless and since the noises can be relaxing and satisfying, it can easily help you out with any sleeping problems or general relaxation issues you may be having after coming home from school, college or work.

Types of ASMR Slime Videos You Should Watch

You are no doubt unsurprised to find that these videos are found on YouTube, as most videos online are these days. Since this is one of those things you’re going to have to experience for yourself, I have experiment a little and have gone ahead and created my very own YouTube slime ASMR videos which you can find just below.

As there are plenty of types of slime, such as ASMR crunchy slime, fluffy slime ASMR and butter slime ASMR that you could watch; I’ve created a few more videos to experience; this will allow you to discover the best slime video for you.

Crunch slime ASMR makes up my type of ASMR slime videos; since they have some sounds that you just can’t quite find anywhere else from the other slime videos on the platform.

It’s a little more ‘aggressive’ I guess you could say, so probably not the best if you’re trying to fall to sleep but slime ASMR crunchy sounds, in my opinion, is one of the most relaxing experiences you can have from an audible experience.

Not to mention the crazy of slime help greatly with the experience and make this by far the most satisfying slime ASMR youtube content you could watch.

This has a lot more bubbly sounds and is probably more soothing than the last slime videos ASMR I suggested. And the color of the slime is a little easier on the eyes but none the less it is still something great to experience.

The use of this slime, as you may find with the others, is that it is played about with very aggressively and this is pretty much down to the fact that the more aggressive you use it; the better it sounds.

I had a lot of fun creating this video more than the others, although I’m not sure why. But feel free to check out my fluffy slime ASMR video just below.

One of the coolest and unique takes on the ASMR slime youtube trend is clear slime.

It is kind of trippy in the sense it looks like water and your brain is convinced its water but in actual fact, its just a bunch of slime.

What makes this so interesting is that you can see the holes being poked into the goo which makes it that much more mesmerizing; you can see a perfect example of this in the clear slime ASMR video I created for my YouTube channel.

Although this sort of slime video appears to be rare on the platform (at the very least I never find it in my YouTube recommended page) it is by far one of the coolest things you can watch on the platform – outside of the ASMRsphere.

Similar to fluffy slime, cloud slime ASMR has that sort of textured look that makes it so appealing. And no surprises but it actually does look a little bit like a cloud.

This is within the same region as fluffy slime ASMR – so if you’re into that then this is at least something new you could look into experiencing. Especially if you’re already getting tingles perhaps the cloud slime might but another way for you to get ‘triggered’

ASMR Slime videos are one of the most soothing videos you could find on the internet.

They especially work well even if you’re not looking for sleep and rather something to relax you after a calm day or if you’ve got a head full of negative thoughts these sorts of videos can really help to take your mind off things.