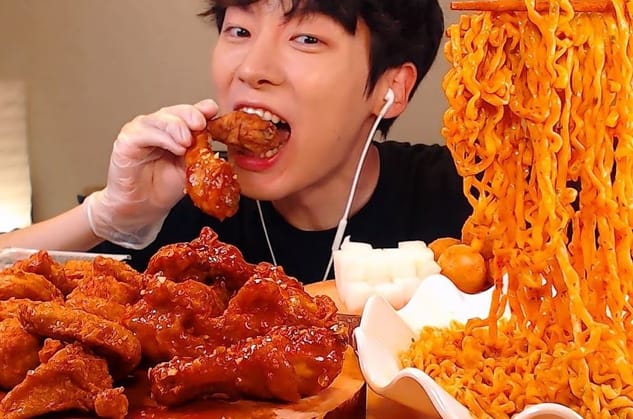 Mukbang ASMR has rapidly increased in popularity over the last couple of years and even more so in the last few months from what I have noticed.

Although I’m not sure why that is, as personally I really dislike this type of trigger.

It’s just too intense for my ears, especially if I’m trying to get my beauty sleep.

So it usually just keeps me awake and alert instead of putting me into a sleepy state.

Which is what usually happens when I listen to most forms of ASMR.

If you’re unfamiliar with what Mukbang ASMR is and you have no idea what I’m talking about;

Let’s get into that

Right before we discuss some of the best videos (with help from my friends) where you can find this trigger in action.

Typically the food they have ordered from a restaurant.

And then they would eat it on camera whilst interacting with the viewer about whatever they wanted.

Usually, the interactions go the same way as conversations would go in real life, where you would just talk about random things over food.

The ASMR has then taken this – as they usually do.

And have put there own ASMR spin on it, which for many is a really comforting experience

But I can’t not cover something on this website because I dislike it, so let’s get into the top ASMR Mukbang videos for ummm ‘relaxation’.

3 ASMR Mukbang videos for your satisfaction

A lot of these creators are somewhat unfamiliar to me; as to my knowledge not a single one of my favorite ASMRtists has created any type of video that includes this trigger,

Probably because they think it’s as disgusting as I do – which is fair enough.

Imagine just being sat in front of your camera for 30 minutes just eating food.

I can’t imagine how weird it must feel.

One of the most popular creators I’ve seen on YouTube performing this ASMR trigger is Zach Choi ASMR.

In fact, I think his whole channel is revolved around this concept – making him the go-to place if you’re looking for some intense ear eating noises.

I’m not sure if there is a therapeutic element to it, but I can imagine its probably very satisfying watching someone eat food – especially when they’re enjoying it.

Sort of like watching someone get an ASMR massage.

You can just see their enjoyment so it just rubs off onto you.

Although I don’t enjoy this trigger what so ever, despite its obvious popularity throughout the ASMR community.

You have to give credit to Zach on how he presents these videos.

A lot of these creators just get straight to the eating part.

But Zach sets the mood by preparing his food (taking it out of the box mostly) which I think just adds another element of satisfactory to the whole video.

As far as the sounds going, this particular video and the rest of them on this list include very wet and chewy noises – pretty intense.

I’d imagine you’re going to watch this sort of content if you’re looking to be satisfied rather than for the purpose of being super relaxed or to help with your beauty sleep.

Unless you’re someone who can fall asleep with intense noises playing in your ear.

Then you may have just found your perfect ASMR trigger.

Personally I had never even seen this guys content show up in my recommended feed, despite the amount of ASMR content I watch on a daily basis.

So this one was a recommendation from a friend.

Jerry has the same type of content as the previous creator Zach where they just eat almost anything they can get their hands on.

Although Jerry seems to get a bit more creative with it, as you can see here with the fake soaps he has laid out in front of him.

Visually its as pleasing as the previous video, since he sets the contents of the video – typically what he is going to eat.

And if you ever read any of my content on this site; you’ll know I absolutely love visual ASMR.

There aren’t as many ‘wet’ mouth sounds in this video as the previous video or any of the other ones on this list.

So I’d recommend this one to anyone looking to find out what this ASMR trigger actually is whilst not being overwhelmed by the natural intensity of the trigger.

Alright, this one just going on this list for the fact that it’s just so visually pleasing.

Usually, one of an intense shade to appeal to the viewer

And it works really well – probably the only reason I clicked on this video to give it a listen was because of the visual thumbnail.

AS far as the sounds go, you can expect to hear some crunchy sugary noises from all of the items this creator eats

Which again I don’t think it is to harsh as some of the wet mouths sounds you’ll hear throughout all of this type of ASMR content on YouTube.

Although you can expect some very chewy noises

I can stand listening to people chew in real life, never mind it being deep in my ear through an ASMR video.

Again, as I can imagine with this content, you’re probably only going to watch this to satisfy something in you – rather than to allow you to get comfortable and sleepy.

This particular video includes many different ASMR mouth sounds at all levels of intensity, so I wouldn’t recommend getting cozy with this video

As if she switches to something else to eat when you’ve just gotten sleepy, it could be too intense on your ears and then you’ll immediately be alert again.

Which sort of goes against the purpose of ASMR in my opinion.

But I can see why some people – just like my friends – enjoy Mukbang ASMR videos.

It really isn’t my thing, and I don’t think it will ever be

But at least I can get some satisfaction from the visual ASMR aspect of these videos – so in that sense, I think there is something for everyone to enjoy.

Overall, it is one of the more strange ASMR triggers that the ASMR community has come up with – but its a popular one nonetheless and perhaps it is or is going to become one of your favorites after reading this article!