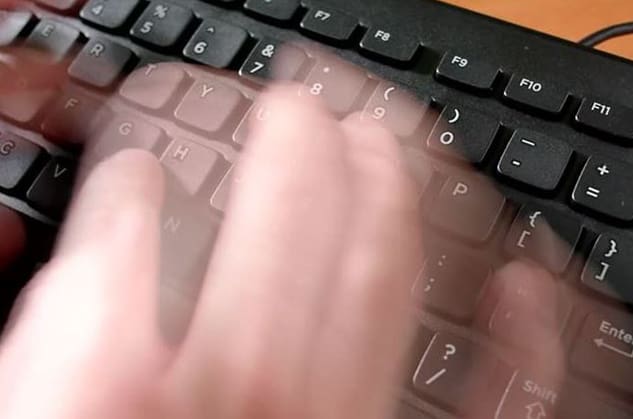 Fast ASMR, not to be confused with fastASMR the ASMRtist on YouTube who to no surprise creates this type of trigger on her channel.

And it is the main reason why a lot of people watch her content.

To get back to this particular trigger, fast ASMR is essentially just your usual ASMR triggers, whether that’s tapping, scratching or crunching – but just sped up.

Performing the trigger faster than usual creates a more intense sound and in my opinion is far less soothing that a soft, smooth and deliberate trigger you can find elsewhere.

But, a lot of people enjoy this type of content and usually, this form of aggression is where a lot of people get tingles as it’s essentially your favorite sounds just sped up to an unusual and unfamiliar pace.

Which can really catch people off guard and give them the tingly feeling they desire.

Since I watch these videos now again for the purpose of getting tingles; rather than sleep – I’ve got a great list for you below that offers a variety of fast trigger sounds that I think you’ll like.

You’ll know doubt to be familiar with the clicky-clicky noises of gaming controllers.

Whether you were someone who played and Xbox or a PlayStation as a child; you can probably hear those clicking sounds right now if you try hard enough.

They were once so familiar to use, and perhaps they still are if you frequently play games.

One of your gaming sessions may have even given you the tingles due to the beautiful clicking noises – you just didn’t know what it was at that time.

And as I’ve stated, hearing it again now can bring back that euphoric feeling you once had.

Or even bring it about for the first time, due to the nostalgia you have with such sounds.

With a range of sounds in this video, due to all the different controllers being played around with – there is certainly a variety of ASMR sounds being created.

And despite what I’ve said, this particular video isn’t too intense, rather I feel its quite soothing – despite the fast nature of everything going on.

Also, credit to the ASMR creator here with that they have done with the background of their video.

It is simply beautiful in my opinion, and it creates for a really nice visually pleasing experience thanks to the color pallet and dimmed lights used.

In this particular video, Glow uses a range of objects to create her fast triggers.

One of the best parts about this is watching her find so much enjoyment from it too as she’s experimenting with each object – which just makes it so more authentic in my opinion.

And allows me to enjoy it even more.

Sort of like when you watch someone get a massage, you can feel their comfort which starts to take an effect on you too.

This video is quite varied when it comes to the triggers that you can hear, at some points in the video they are pretty mild in terms of intensity.

And Other times it is almost unbearable (in my opinion) but I guess this is the appeal of fast ASMR.

Is that you’re unsure what’s going to happen next.

And this is probably a great reason as to why these types of videos are peoples go-to’s when they’re looking to actually get tingles instead of being put into a sleepy mood.

As these unusual sounds can cause this to happen – or so I’ve found from past experiences.

As you may have guessed, a lot of these videos are pretty similar.

As they all hit the same vein of concept, fast ASMR – duh!

But I still think Jojo ASMR does a great job of bringing something new tot he table in the way of the sounds which he is able to create.

Both with his mouth as well as the objects around him.

There is no real range of intensity here; meaning that it doesn’t start harsh and slowly fade to soft as the video goes on – as some creators like to shape their videos.

It’s pretty varied all the way through; so if you’re not sure what you’re looking for and you don’t mind the mix of harsh and soft sounds.

Then this video should be on your watchlist.

There’s not much more to say about this video; as always these things are better experienced than just read about online, so I encourage you to give the above video a listen if you’re looking for plenty of fast ASMR sounds to listen to.

If you’re someone who enjoys talking in your ASMR videos – as I do.

Then this next video will be more ideal for you.

I actually quite enjoy this video from Marno ASMR despite me saying in the past I don’t really enjoy male ASMRtist all that much.

Marno’s videos are always very creative, from what I’ve seen from him and this one is no exception

If you’re looking for something just a little bit different than someone recklessly tapping on objects really fast, I couldn’t recommend this video enough for you.

There is also plenty of objects he features in this video; a lot more than any of the other creators I have featured in this article.

So if you’re still looking for something that could set your tingles of, and you just haven’t quite found that object or sound just yet.

Then perhaps watching a video like this will expose you to more sounds and objects that could potentially give you those ASMR tingles.

Almost all of the videos I have listed in this article feature plenty of tapping noises on various objects and not enough mouth sounds.

This last entry changes that, with plenty of fast ASMR mouth sounds that will no doubt be able to give you the tingles.

if you’re someone who prefers mouth sounds over object tapping, then this is probably a better video for you.

Although there is some tapping here in this video, the majority of the noise which is created is from the creator’s mouth.

Mouth sounds are super soothing to me, even when they are done in a fast manner like in this video.

And overall I think they are a great addition to any ASMR video and I’m glad someone has used them as their focal point in this particular piece ASMR content.

This is a slight curveball in what I’m trying to focus on with this article but I’m going to count it anyway because it still technically what we are looking for.

This fast vs slow ASMR really displays the difference in sound that can be made by simply doing something at a certain speed.

Whether you’re tapping, blowing or squishy you can make some interesting sounds the more you speed up or slow down.

and I think this video is a great comparison for both these styles of triggers.

Despite the weird Shrek concept that features in this video – which I think takes away from the cool theme but whatever.

It’s still pretty enjoyable despite not being super serious.

Fast ASMR isn’t for everyone; simply because it can be a pretty harsh trigger to listen to – especially if you’re trying to get some sleep.

Although I think its a really great trigger if you’re looking to experiment outside of your ASMR comfort zone and potentially find something that can give you the tingles.

As in my experience, anything that is intense or fast has had a great chance of giving me ASMR tingles that anything else I watch – despite my preference for slow ASMR sounds.