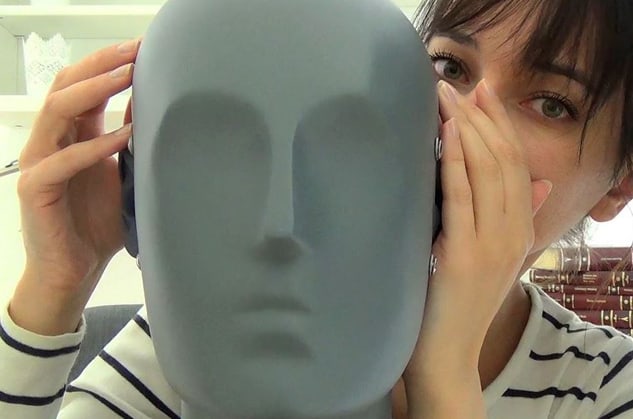 Binaural ASMR is by far one of the best experiences you could have with trigger sounds – whether they’re featuring your favorite ASMR tapping noises or they just feature some rambling thoughts from a creator you love.

If you’ve watched any ASMR on YouTube you’ve probably already watched a binaural video, but perhaps you’re not even sure what that is just yet; so let me tell you.

What Is Binaural ASMR?

Binaural ASMR is relating to a recording of the sound that uses two microphones that are there transmitted separately to the left and right ear.

This is a popular form of AMSR since the creators can get a wider sound range than they could with a standalone mic, although this type of ASMR is more than okay for relaxation, sleep and ASMR tingles.

There are many types of binaural ASMR microphones that ASMRtists seems to use, although the most popular one would have to be the 3DIO microphone which has the microphones looking like two pairs of ears – this being more immersive and the sound typically is more realistic since the vibrations bounce off the foam ears – just like it would in real life.

Now that you know what binaural ASMR is, and perhaps you’ve already found your favorite videos but had no idea they were featuring binaural sounds.

Nonetheless, we’re going to get into the top 6 binaural ASMR videos for relaxation – from a range of creators that you’re probably more than familiar with by now if you’ve been a part of the community for any length of time.

This is one of my favorite 3DIO ASMR videos out there on YouTube today despite its age – there’s just something about watching Poki ASMR discover all kinds of sounds and her getting so excited about it which is so heartwarming to watch…and relaxing of course!

3DIO is by far the best binaural microphone that any ASMRtist uses and I really think nothing else can compete with it; typically any video that contains this microphone is far better than it would have been without.

With a range of noises from tapping on the microphone and mouth sounds she creates, this is a really great all-round video if you’re looking for some entertainment as I feel like a lot of the enjoyment is from watching her use the microphone for the first time – sort of visually triggering in a way.

This is such a great video, in my opinion, a really great take on the typical ASMR binaural videos since the microphone he is using is a 3DIO except with a custom cover – in the form of a head.

This creates some really great ASMR tapping noises throughout the entirety of the video.

Through experimenting with different triggers, ASMR Zeitgeist uses plenty of ASMR triggers with this microphone so if you’re into a more ranged selection rather than just one sound or visual trigger – perhaps because you’re not sure what you enjoy watching just yet.

Then this video should be on your watch list tonight.

Similar to the previous video, this one also uses a custom form of 3DIO which features a head to create some overall interesting sounds throughout – perhaps these are so popular as they are more immersive but who knows, they are always relaxing to watch either way.

The purpose of this video is ear cleaning, so expect a lot of sensitive sounds around your ears – sometimes these can be overwhelming but I feel like the creator has done well with the overall sensitivity of the noises they create.

Uniquely, they use close up camera angles when cleaning the ears of the microphone, which I think creates some great visual ASMR that works well with the sounds they make – since you can almost imagine this being your ears – helping the sounds feel a lot more real.

Featuring something other than 3DIO microphones, the general setup for these types of videos is two microphones that would send the sound to ears separately, which is another valid way of creating binaural ASMR.

Speaking about this video more especially, it features plenty of general mouth sounds since the creator, Gibi ASMR, is just rambling and talking about general things.

I understand that many people only like this type of ASMR as other sounds can be annoying and uncomfortable, so if you’re looking for binaural ASMR that can send you to sleep and give you the ASMR tingles you love – then check out the video linked above.

These types of microphone tests videos are great for exploring ASMR triggers but I find them to be a little hard to get to sleep with as the sounds are pretty unpredictable so you’re not sure what you’re getting yourself into.

Although saying that, binaural microphones like this one usually feature sounds that aren’t too intense, so you’re more than safe with going to sleep with this video on as FrivilousFox ASMR is usually pretty gentle.

Headrec, which is the microphone that is being used, is a little like the 3DIO except I believe its a more expensive version, so the sound range which you will hear with this microphone is far greater and more detailed – which if you’re into a more realistic experience then videos like these will be perfect for relaxation and sleep.

Continuing on with more FrivlousFox content, ASMR mouth sounds are by far the most popular way of using binaural microphones such as this one. Although they are intense, some people really do find them enjoyable.

Over 3million people watched this video, so there must be some interest in it – and I think you should give it a try, even for a couple of minutes because a microphone like this with the sounds she creates is really trippy and you never know you might even enjoy it.

Sounds like these can give me the tingles but its something I don’t fall asleep to because of its intensity, but the intensity is exactly why ASMR tingles are possible with this sort of ASMR trigger – so give it a go!

Binaural ASMR is by far my most favorite way of hearing the ASMR trigger sounds I love – binaural ASMR just gives a whole new outlook on these particular sounds as I think these type of microphones can just pick up a wide range of levels you wouldn’t necessarily be able to find with a singular mic.

Overall, if you’re looking for another way to listen to the sounds you already love, then looking into some of these videos will allow you to get a look as to why Binaural ASMR is so popular within the community.