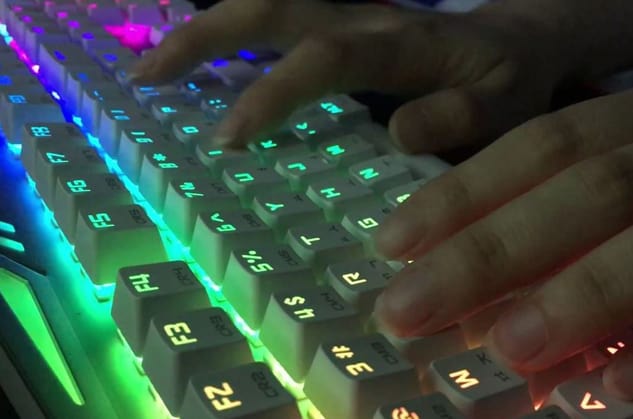 ASMR typing is another great ASMR trigger that would seemingly go unrecognized if it wasn’t for the ASMR community.

I say this because people are typing everywhere around us, someone is always using a phone or a laptop and the trigger may just go unnoticed.

You might even feel the tingles from this experience but are unsure of why it has gone off due to the fact that we are always being exposed to this particular sound.

However, ASMR content allows us to get up close and really pay attention to quite a wonderful trigger.

The variation with this one depends on what else the creator decides to add to the video, whether talking or tapping on other objects

As well as what sort of keyboard they have to recreate these sounds.

To a mechanic gaming keyboard which makes heavy and more aggressive sounds.

I’m sure you’ll have your preferred sound if you watch many ASMR videos, so I’ll try to include a variety of videos within this list so that you can find something that you’ll love

Let’s get into it.

To start things off, this ASMR typing video is perfect for anyone looking for something that isn’t too harsh on their ears.

Intense sounds can be quite hard to listen to if you’re looking to get to sleep, and some people just aren’t really accustomed to hearing them.

With this video, in particular, you can find some nice and quiet but still effective keyboard tapping noises that can really bring about that relaxing aura we are looking for.

This will be a common theme throughout but this video is also very visually pleasing, due to actually watching someone tap on their keyboard.

The tapping also seems to have a purpose, it isn’t just random numbers and letters been pressed as you see in the commercials.

Which I think makes it even more relaxing for the viewer.

This video is just over an hour of ASMR typing and is by far one of my favorite ASMR typing videos on this list.

You could probably guess why but let me tell you; the VISUAL ASMR of this video is just something else.

There just something about beautiful lights that do it for me, especially when it comes to getting some sleep, any sort of flashing colorful light just hypnozoites me into a sleepy state and I just can’t stop watching.

Till I fall asleep of course.

If you’re looking for something a little more intense than the last video, mainly due to the type of keyboards which are used

Then this video is going to be a better choice for you than the number 1 spot on this list.

I’d suggest skipping around between the keyboards to see if you can find one that you like, I personally just started at the beginning and explored the video every night – choosing a different keyboard to listen to before I slept.

I love them all If I’m honest, but I’d recommend watching the whole video even if you split it up over the rest of your week just so you can get a feel of what sort of keyboard your ears agree with the most.

And maybe you’ll even get ASMR tingles from one of them.

I’m all for beautiful colors when it comes to any sort of ASMR trigger, especially because the visuals are much more pleasing.

And the same goes for ASMR typing – as you will see in this video.

If you don’t mind a low FPS video, then this will be the perfect, short but visually pleasing video of ASMR typing for you.

With some great noises that aren’t so intense on your ears to the point where the video is just too uncomfortable to watch – you’ll fall in love with this type of trigger as soon as you start watching.

Again I could be wrong but the typing doesn’t seem all that random, so it adds a level of authenticity which I think really helps you with the immersion aspect of the video.

Which I believe to be an important part of ASMR, especially videos like these where the ASMRtist is actually doing something.

It can be nice to know they are ACTUALLY doing something rather than just faking it just for a video.

Winter Whale ASMR is becoming one of my favorite ASMR channels at this point, all of their camera setups are so beautiful they just make for such a visually pleasing video.

Anyway, this keyboard is pretty simple, with no colors or particularly harsh sounds like a previous couple of keyboards used int he ASMR typing.

On top of that, this is a 4-hour long typing video; 4 HOURS!

So, if you’re looking to get some sleep to this ASMR trigger or you just want to listen to something whilst studying or playing video games – I think I might have found the perfect ASMR video for you.

The best part about this is that its just ASMR typing, so if you’re someone who hates creators adding different sounds in to compensate for any lack of noise or because they like mixing things up a little.

Then this just has to go on your bedtime sleeping playlist.

I hear typing so much every day, but don’t appreciate it as much as I should – simply because I’m to busy to do so.

Thankfully with ASMR typing videos like these, you can appreciate the visuals and the sounds of keyboards in a more controlled and comfortable setting.

Allowing you to open up your senses to this particular trigger to help you with staying relaxed and getting the sleep you need.

And who knows, perhaps give you those tingles we all love.