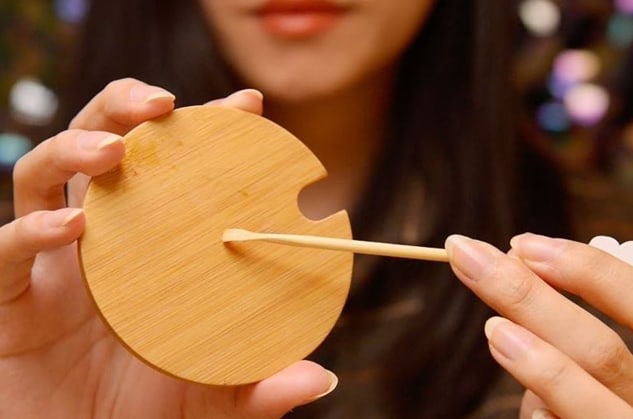 ASMR scratching is amongst one of the more common ASMR triggers you’ll see throughout all your time on our little corner of the internet.

I’d put it alongside such triggers as ASMR tapping although I’d say its a lot more intense than these particular ones; it just as common.

ASMR scratching can be pretty intense, just like tapping, depending on what is being scratched to create the noise; some like it intense and some don’t

Because of that, I’ve tried to include a few good variations of the trigger so you can find something you like – and something you’re willing to put on your night time listening playlist.

Enough talk, let’s get into the best ASMR scratching videos for sleep.

Sometimes the scratching can be on an object away from the microphone or it can literally be used on the microphone itself, as you can see from the thumbnail of this video.

This type of scratching is way more intense than anything else I’ve experienced.

It probably is called deep brain scratching for a reason though.

What also makes this a great video is that it contains no talking; talking mostly features in all videos of ASMR since it’s great to fill the silence but it can take away from the ASMR trigger.

And on top of that, if you’re not expecting someone to talk, it can remove that level of relaxation you have from the video due to you being surprised by a voice.

As well as some people just can’t get to sleep when someone else is talking, even if it’s in a soft whispery voice.

Considering the microphone is being scratched, it isn’t too intense to the point where it disruptive or generally uncomfortable, so if you’ve never experienced ASMR like this before – I’d recommend watching this video.

If you’re looking for a variety of objects, some a little intense and others not so much, then Gibi ASMR has a great video in store for you.

Although this one includes some talking, as is common with Gibi’s videos, you are more or less guided through what each object is which I think isn’t so bad, I like this sort of talking.

In comparison to random rambling which I feel like doesn’t fit with the ASMR that is being created in most cases – unless it’s specifically an ASMR rambling video.

If you’re unsure yet as to what type of ASMR like you, in terms of intensity, then I strongly recommend watching this video to get a feel of what agrees most with your ears.

As well as what seems to be the maximum sort of intensely you can endure where you can still get some sleep.

For me personally, I can only listen to calm/soft scratching noises when I’m looking to get some sleep.

So really it all depends on what I’m looking for.

But if I listen to more intense noises, I have a better chance of getting ASMR tingles.

If you’re looking for super intense scratching noises, then I have a video that you’ll love.

if you’re someone who doesn’t like talking when you’re looking for a particular ASMR trigger then this will also be perfect for you.

Featuring a range of objects that are being used to scratch other objects, you can get a full all-round experience due to the way the microphones have been set up

This way you can almost feel the noises in different parts of your hearing – which creates for a really atmospheric experience as well as keeping things fresh.

Because if you’ve got your eyes closed, you just don’t know where the noise will come from next.

Which I find really helps in the way of getting tingles because you just don’t expect the sound to appear in that location.

I might have explained this poorly, but you’ll know what I mean if you give the video a try tonight.

Some of my favorite scratching noises are simply created by scratching the microphone, typically a Blue Yeti but I think the top of a 3DIO is always a really tingly experience for me.

but super intense, so I understand why people may disagree with me here.

In combination with light whispering and some nice gentle breathing; this is more of a personal attention type video but I just love it so much.

It never fails to relax me, even if the scratching is intense, the talking in the video helps relieve some of that intensity the trigger producers.

I think overall it’s just such a great combination of triggers that really makes for a personal experience and I think its probably one of the best intense scratching videos that aren’t too harsh on your ears.

FrivolousFox ASMR does some great personal attention on her channel and is usually the general theme for her content so its no surprise to me that I’m in love with a video like this.

I’m pretty sure I’ve spoken about this video many many times before on this website, but it’s just so damn good.

What I love more though is fluffy mic scratching since it creates so many intense noises my ears just love it.

Again it features some very intense sounds but I think ASMR Glow does well to commentate over it so you have a mixture of harsh and soft sounds, which I think work perfectly together.

I’d recommend this or the previous video from Frivi for anyone looking to experience the trigger but want a little variation in the way of different triggers being used to help soften out the overall intensity of the video.

I think the visuals of this video are so nice too, so easy on the eyes.

which is very important on any video you watch online, for entertainment usually.

but this video just looks so relaxing, Glow herself looks so cozy and the dark lights on the video just make you want to be cozy.

And it really works, I always come back to this video if I’m in immediate need of relaxation.

ASMR Scratching can be intense, but it also can be smooth and helpful to your relaxation.

But more than certainly it has given me tingles in the past, thanks to its intensity.

Just like ASMR tapping, there is a lot of exploring here, so I’d recommend checking out these videos as they include a great range of sounds so much so I bet everyone can find something they like here.