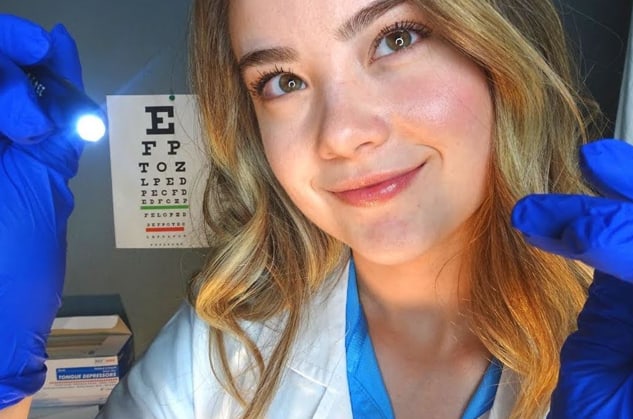 ASMR roleplay is one of the most popular types of ASMR styles throughout all the content on YouTube.

Since its not an ASMR trigger, rather its a style of ASMR video that can contain many different triggers, depending on what sort of RP or Roleplay is being performed.

I could go on forever with my favorite ASMR roleplays if I’m honest, there are so many to choose from and so many good ones it’s hard to keep the list small, but I’ll do my best.

Anyway, let’s get into what exactly is an ASMR roleplay and perhaps look into why they are so popular.

After that, we’ll discuss some of my favorite ASMR roleplay videos and outline what you can expect from them.

What is ASMR Roleplay?

ASMR roleplays are any kind of roleplay you can imagine, but with ASMR in mind.

From doctor to girlfriend – literally anything you can imagine can be turned into a roleplay.

A lot of the reason as to why they are so popular is because they usually following an instructional pattern – meaning the Roleplayer usually walks you through some form of scenario, whether that be with their voice or because the roleplay is of a common scenario everyone knows.

The reason this is so important is that the roleplay is then more immersive for the viewer, so you can get wrapped up in the specific setting/scenario.

Which potentially offers a whole new kind of tingly experience

This ay you can enjoy the video more as you are familiar with your surroundings, almost like the world is being built for you in a way.

Sort of the like the way video games work.

On top of that, it can also put you into an unknown scenario, whether that’s a roleplay about a crinal nerve exam, that you haven’t actually had before but because it’s reported to be a tingly experience

You can actually live the experience.

Thanks to such videos on the internet.

Overall, ASMR roleplays are super popular as they usually contain lost of different triggers whilst putting you in a cool scenario – which really does help with relaxation and sleep.

if you’re someone looking to experience a lot of different triggers and want to be captivated in a different scenario, as appose to one single trigger where someone performs it in their bedroom.

Then ASMR roleplays are for you.

The fun part is finding a roleplay that you’d like based on you as a person; whether you’re looking for a specific anime character role play, or because you want to experience a medical examination because of how much personal attention goes into them.

With your new understanding of ASMR roleplays, let’s go over some of the best RP’s I’ve watched, giving you a good place to start if you’re looking for something that fully resonates with you.

Probably one of the most favored types of ASMR roleplay is the cranial nerve exam Roleplays, as I’ve mentioned in this past.

Personally, I tribute a lot of its favoritism to the range ASMR triggers that get used all throughout these types of videos.

From soft whispering or talking, to hand movements and some brain tingling sounds.

They’re just something for everyone, and the videos I’d recommend for anyone looking to discover something new with ASMR – as there is so much on display here.

And all of the other videos in this ‘genre’ that you are bound to find something that is for you.

Or even something that isn’t for you, which is perfect if you’re looking to discover the best type of ASMR for you.

For sleep, relaxation and hopefully in the way of getting you tingles.

Another reason why I love these types of ASMR roleplays is because of the personal attention which is associated with it.

It fits perfectly because this type of attention would happen in a real cranial nerve exam but I just think it’s so relaxing – in combination with light tracing and hand movements.

Something I haven’t seen from the other cranial nerve exams on YouTube is the receptionist bit at the start of the video which Gibi added.

I think this adds an extra layer of personal attention ASMR as the camera is pretty up close and it also just adds to the realism and authenticity of the entire situation.

Overall one of my favorite ASMR Roleplay videos and obviously one of the best cranial nerve exams on YouTube.

Something I haven’t seen from the other cranial nerve exams on YouTube is the receptionist bit at the start of the video which Gibi added.

I think this adds an extra layer of personal attention ASMR as the camera is pretty up close and it also just adds to the realism and authenticity of the entire situation.

Overall one of my favorite ASMR roleplay videos and obviously one of the best cranial nerve exams on YouTube.

Forgive me for adding Gibi ASMR more than once in this list, but she produces some of the best ASMR roleplays on the platform – and also comes up with some more uncommon ASMR videos.

The reason this is such a good piece of ASMR content is that not only does it allow me to relax but it also allows me to reflect on my day.

Some of the questions are your usual thing; name, what have you ate etc.

But then some of them really get into your past and your desired future.

Which I think is really great for reflection – something you might not actually do subconsciously without prompt.

Such as this video.

There is no special sort of hand movements or a mixture of ASMR except the words she speaks; obviously.

As well as some writing and tapping sounds.

So its a really ‘gentle’ video when it comes to ASMR – especially if you compare it to the previous ASMR roleplay I featured.

And I guess this isn’t technically a roleplay although it can be seen as one if we were to call it ASMR Roleplay Interview.

But I think it’s just a really great one to include – despite your stance on whether or not this is a Roleplay.

This ASMR roleplay is an ASMR acrylic manicure roleplay, which features plenty of different ASMR sounds like the first video in this list.

So another great video for anyone looking to find a new trigger that could help them sleep or relax.

Or get them the tingles they need.

This type of Roleplay features a heavy amount of personal attention, as you can imagine if you’ve ever had the delightful experience of a manicure in real life.

Understandably, this type of ASMR is directed more so to females, but I have a couple of male friends that enjoy this video due to the heavy amount of personal attention that is featured.

Overall, this is another awesome ASMR roleplay that contains many different triggers that will help get you the sleep and relaxation you need.

I’m assuming this video is more directed to a male audience, but as a girl, I still found it super tingly.

So I’d still give it a watch regardless of what you’re into.

Basically this video is super personal attention based, as RoseASMR is actually as your girlfriend.

Encouraging you to get comfortable so that you can get some rest.

After a hard day at work or school.

This ASMR video contains a lot of talking, mainly some trigger words such as “I Love You” which is always welcome in any personal attention video.

Especially if you haven’t heard those 3 words being muttered in a while from a loved one.

In addition, there are also some hand movements which really help to relax and is another great aspect of ASMR.

If you’re looking for a personal attention ASMR, especially one that contains a lot of hand movements which could really help with anxiety you may be having (this is what it helped me with at least)

Then I’d absolutely recommend this video to you.

There are plenty of ASMR Roleplays on YouTube, here in this list I have only scratched the surface as to what is available for you to watch.

From girlfriend roleplays to hospital roleplays, there is no doubt in my mind there is going to be a roleplay video for you that contains all the triggers you love that can give you the tingles.

Or at the very least put you into a sleepy state.

These videos serve as a starting point for you to go and find your favorite roleplay videos – I’d highly recommend watching these as they contain every kind of ASMR trigger available.