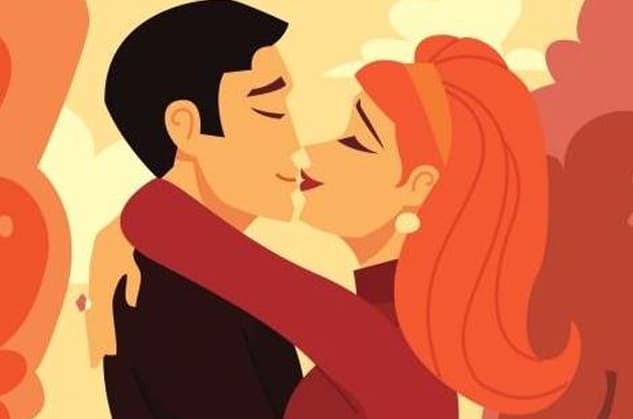 I’ve recently covered ASMR girlfriend content on this website, and I think ASMR kissing falls in a similar category as this particular trigger is usually performed within this type of video

Although the combination is far from exclusive.

ASMR kissing can be described as a mouth sound, which would then bundle it with other ASMR mouth sounds like ‘tsktsktsktsk’ and ‘sksksksk’ etc.

As well as trigger words, which produce their own unique sounds depending on the words being said due to the lip-smacking process that happens when you say words

I’m sure you’re more than familiar with that.

ASMR kissing is quite a wet and sloppy sound – it seems disgusting on the surface.

Mainly due to the sound it creates but also because of the type of trigger it is.

Kissing is typically from a loved one – so part of the enjoyment is the experience and the thought of someone you love or that loves you – giving you these kisses.

An all-round soothing experience for those that can tolerate the sound.

If that’s you, or you just want to see what the fuss is about, I have lined up the best ASMR kissing videos for relaxation and for your enjoyment.

A lot of these will be pretty sexual, obviously kissing is on some level of sexual itself anyway, regardless of how you do it.

The reason I say this is because RoseASMR does a good job of keeping things innocent when it comes to these kissing noises.

She appears to actually want to make her audience feel comfortable, rather than to obviously sexualize the sound so that she can get more viewers, Instagram followers and whatever else people upsell from their ASMR channel.

Along with some nice whispery talking, this particular ASMR kissing video will be perfect for anyone looking to get a soothing experience so that they can get into a relaxed state.

Although kissing sounds aren’t really directed towards me (as I’m a female) they are welcomed, and the videos are always enjoyable to watch as the trigger in some cases is super soothing.

When it isn’t hypersexual like some of these videos are.

if you’re looking for a not so intense version of ASMR kissing, then this particular video should be the first one you watch,

Especially if you’ve never heard this trigger performed before, as it is ‘ear-friendly’ in comparison to some of the more intense ASMR kissing videos on this list and on the rest of YouTube.

FrivolousFox is the queen of ear licking and ASMR kissing in my opinion.

A lot of her content is revolved around these triggers and she is generally the go-to place for them – and for good reason.

She includes a lot of visuals in all of her videos, which is why she is one of my favorite ASMR creators overall.

But in this one especially she includes a lot of face touching which I think goes along really well with how up close she is to the camera – which obviously makes for a more personal video.

In terms of personal attention, it is super intense which can put people off, especially if you’re just here for the sound.

I think it makes the video even better than if it were just to include the sound itself.

As far as the ASMR kissing itself, it isn’t too intense, wet or sloppy so it is quite enjoyable to listen to in my opinion.

As I’ve said previously this trigger can be quite intense but this is another one that is manageable, even if you are trying to close your eyes and go to sleep – it isn’t too loud or too intense to keep you up.

It’s rather soothing if I’m honest.

She really is the queen of this trigger.

If you’re looking for a more varied version, that isn’t as visual as the others – meaning that you’re free to close your eyes knowing you won’t miss much

Then this next video is going to be perfect for you.

From slow to intense ASMR kisses, this is a really great video for anyone who is unsure about this trigger and whether or not like enjoy soft or intense sounds.

As we are all different, even when it comes to enjoying ASMR, some of us like soft sounds and other like intense

It’s perfectly normal to like either, the fun part if experimenting and find out what it is you like to listen to

And a video like this will allow you to explore such avenues so you can really find out what you like when it comes to enjoying ASMR.

I think ASMR kissing videos are of a pretty unique taste, especially due to there pretty intense nature – although I think they can be softened up if the creator takes more time to do the trigger

This can be done by slowing the kissing down so the noises aren’t as harsh.

overall, if you’re looking for a single trigger, that can be both intense and soft as well as giving you plenty of personal attention so that you can get the sleep you need

I’d check out any of the videos on this ASMR kissing list.