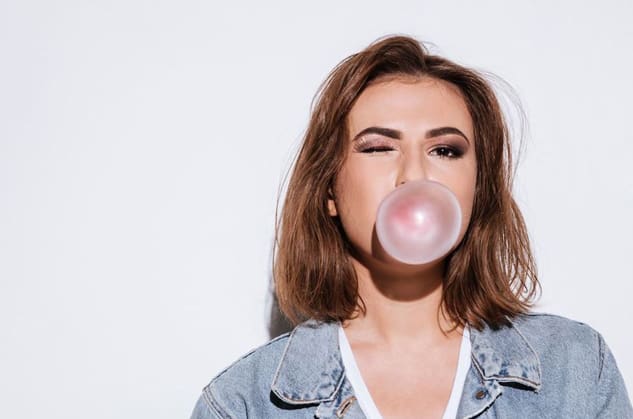 ASMR chewing is somewhat of a common trigger, especially if you watch a lot of ASMR eating videos.

But pure ASMR Gum chewing is quite popular, and very intense because it creates constant noise – unlike eating where there are breaks in between for adding more food into your mouth and swallowing.

Gum chewing is just a constant thing, as you probably know if you’ve ever chewed gum before.

Which, you should have.

Anyway, let’s get into the best ASMR gum chewing videos for your enjoyment – and hopefully, relaxation or even some sleep if you don’t find it too intense.

Warning – these are pretty intense ASMR triggers, as you could probably have imagined.

This gum-chewing video includes a lot of other triggers, despite the main focus being on gum chewing – a lot of tapping and rambly words are being spoken over the top of the ASMR chewing.

But I think that really helps with the trigger, as it can get pretty boring listening to something like gum chewing for 30 minutes on end.

So I appreciate the rambling and additional sounds that have been added here.

And I think you will to.

If you’re wanting to get straight to the gum chewing, as it doesn’t happen immediately in this video – I suggest just skipping ahead a little when you can finally listen to this particular ASMR trigger.

Overall I think gum chewing makes some really nice but intense sounds and it definitely isn’t for everyone as its not uncommon for people to hate chewing.

Even in their day to day life so I completely get it when people just hate this kind of ASMR trigger.

But I think you should give it a try, and this first video is the perfect place to start.

Another great video that includes ASMR gum chewing but doesn’t feature it as the only trigger in the video.

Some people can find that a little annoying if they want that particular trigger but I think it makes sense because as I’ve said before just listening to this trigger can get pretty boring.

With some inaudible whisperings, which I’m a big fan of when it comes to getting some sleep as I will focus less on the audio – as I can’t understand what’s being said anyway.

So I just appreciate the noises more rather than listening to where the conversation is going.

There is a lot of rambling at the start of the video, but I’d recommend skipping that if you want to get into the gum chewing right away.

Although this is from a male creator – and as you may know I’m not really a fan of the vocal range most male ASMRtists can create with their voice.

Ryan’s voice is pretty soft, just like plenty of my favorite female creators – so if you’re someone like me who prefers a gentle voice when watching ASMR videos.

Even if the mouth sounds are inaudible, I’d still recommend giving this video a watch.

I enjoy watching slow and soft ASMR videos, ones that feature triggers that aren’t so aggressive, especially on the ears.

ASMR gum chewing, in my opinion, is pretty intense, but it’s not so bad once you slow down the chewing and at some point its actually pretty relaxing to listen too – especially if the creator adds in other ASMR triggers.

This next video, however, features faster and aggressive chewing – which In my opinion isn’t so nice to listen to, especially if you’re looking to relax.

But, I understand that people enjoy this style of ASMR, as some of my friends do.

Quite a few of them had recommended me this video, so it felt only right to add it to this list for anyone looking for some fast-paced chewing for relaxation or even for sleep.

I’m sure if you like fast and aggressive triggers this will be sure to give you the tingles you’re looking for.

To my surprise, there doesn’t seem to be many gum chewing videos on YouTube, despite it being a popular ASMR trigger.

Although I’ve featured this creator already, I think she deserves to be in this list a second time for this next ASMR gum chewing video she has on her channel.

It contains a good amount of talking, along with some tapping to keep things fresh and she has a super nice soft voice which really goes with the chewing noises she creates.

I’m not surprised shes on here a second time, nor should you be.

As Frivolous always creates great ASMR content, and as hard as ASMR gum chewing is to perform – as I’ve said earlier not a lot of people seem to get the balance right when it comes to implementing other triggers.

She does a good job of creating another great video that is soothing and relaxing and one that I actually enjoy watching from time to time to put me into a sleepy mood.

This is honestly surprising for me as I generally don’t like the harsh sounds of chewing but she does such a good job here I’d recommend this one to all my ASMR friends.

Much like marmite, ASMR gum chewing is a very unique trigger that you either love or hate.

I’m really on the fence about this one, some of these videos I actually quite enjoy and others are just to fast and aggressive for me but I included them anyway as I know some people like that style of ASMR.

Overall there is a lack of good ASMR gum chewing videos on YouTube and I think more would be welcomed by the ASMR community in the future.