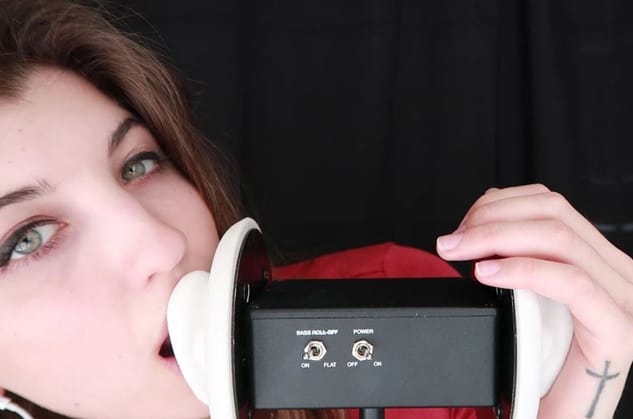 ASMR ear eating is by far one of the most bizarre types of ASMR that the community has found to get their tingles from – but I shouldn’t knock it, whatever works I guess.

Today I want to get into exactly what is ASMR ear eating and some of the ‘best’ videos you can find on YouTube to have quite the unique experience – and who knows maybe you’re one of the people that can get ASMR tingles for the ear eating ASMR in question.

What Is ASMR Ear Eating?

Well, it exactly what it sounds like it is – ear eating!

But not literally – ASMRtist use microphones such as the 3DIO which are built with foam ears which they then ‘eat’ (more like sucking but it sounds like eating when you watch one of the videos in this list) to give their viewers ASMR tingles.

This type of ASMR is not made for sexual purposes, despite what you may think – as many people outside of the community believe so but some people really do like the intensity of all of the sounds the human mouth creates.

Especially since the experience is so unique because generally another human would never have the opportunity to ‘eat’ your ears in real life.

There can be some variety with this type of ASMR, although he majority of it includes general ‘nom nom’ sounds – creators may use other substances which they place on the foam microphones to create other sounds on top of the sounds they already make with their own mouth.

Let’s start with the queen of Ear Eating, FrivolousFox ASMR.

She by far has the most satisfying ASMR ear eating videos for anyone to enjoy, especially if it’s your first-time experience this sort of trigger.

A lot of the other videos featuring this trigger seem to be sexualized by the ASMRtists, but I understand if that’s more your thing.

However, when FrivolousFox does it, its a lot more enjoyable since you know she’s doing it for the purpose of giving her viewers the tingles, not simply out of trying to rack up the views, a really innocent take on something that these days get heavily sexualized.

And that’s coming from someone who rarely watches ASMR ear eating videos.

Since Ear eating isn’t all that varied, despite its popularity, I’m also going to include ASMR ear licking as I feel it falls in the same category altogether – since its pretty much the same thing in my opinion – or at least similar ASMR sounds are created.

This next video is by a channel called ‘tangerin‘ who has created a very satisfying ASMR ear licking/eating video that isn’t as intense as the other on YouTube.

I think a lot of the appeal of these videos is definitely the visual stimulation of a (usually cute girl) licking the microphone – I think its a little unusual but perhaps why they are so popular.

Id recommends this video only to the ones looking for something a little more intense or for people that can’t stand to only have one of their ears filled with sounds and one of them being left behind.

I think this is in the same vein as FrivilousFox’s video where it doesn’t appear to be overly sexual, but more innocent – you really feel as if the creator actually cares about their viewers getting the ASMR triggers and I think again it just makes it more enjoyable because you can feel their intentions.

Perhaps this is why I actually got tingles from this video because of the energy the creator was giving off here.

Another FrivolousFox video here, because honestly, I think she is the best at this whole ASMR ear licking thing so she just has to appear on this list more than once.

This video is a little different from the one further up on this list as she includes other sounds such as ear licking and mouth flutters which I think personally works perfectly with the ASMR ear eating trigger as it adds some variation to the content.

Beyond these 4 videos, I think the rest of the content on YouTube which features this type of trigger is over-sexualized and overused for the purpose of getting clicks – so I don’t think it most of it deserves a spot at all next to these great 4 videos.

However, if that’s more your thing, feel free to ignore more recommendations and go explore ASMR ear eating videos for yourself, I’m sure you’ll find something suited for you :).

As always, much appreciated in stopping by today and reading my post.